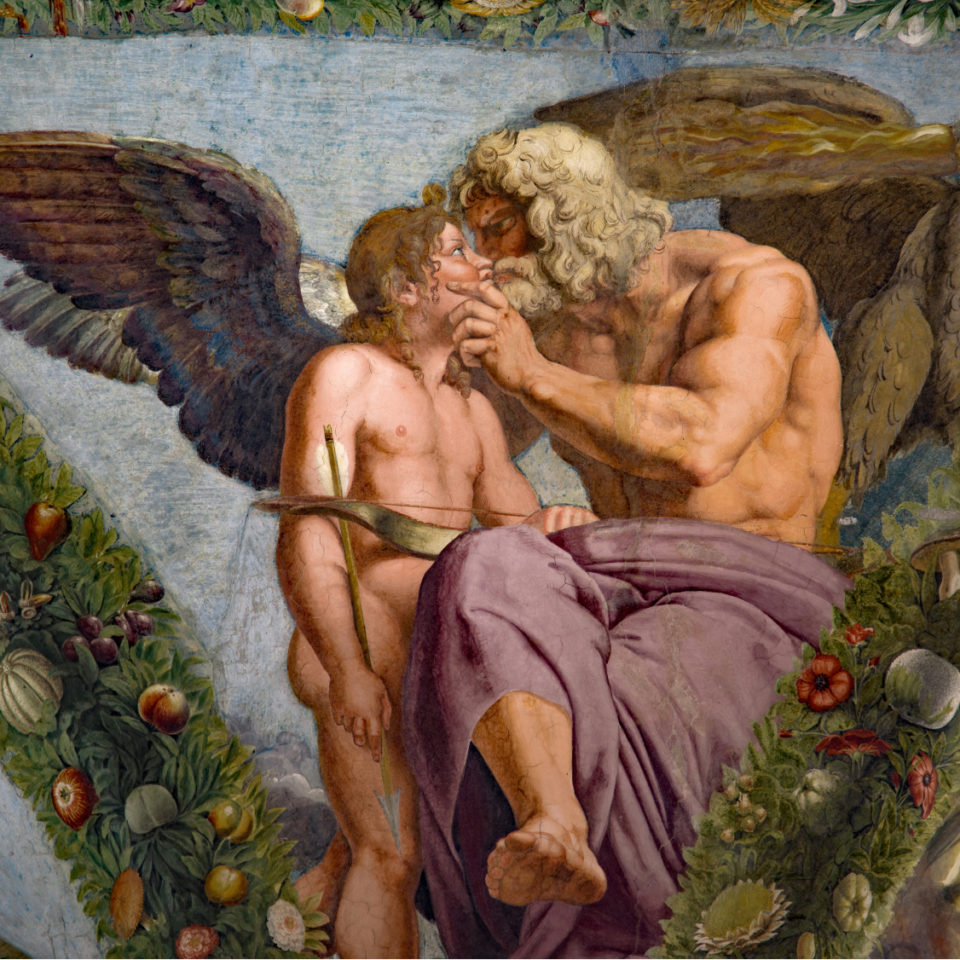 Raffaello Sanzio lived a great part of his existence in Rome, after having learned his art in Urbino, in Perugia and Florence.
Rome in 16th Century was the European centre of religion, politics, art. Immensely rich families of bankers settled in Rome, to have a chance to boast a Pope in their household. Patrons such as the Borgheses, the Barberinis, the Farneses spent fortunes to have the best artist working for them in their palaces, or in the mail basilicas of Rome.
Raffaello, despite the hostility of Michelangelo, was welcomed , also thanks to his generosity, elegance, and personal beauty. The beauty which gave him the great popularity and likely his death – dying of syphilis at 37 years old.
A passionate young man, he explored any way to describe the human body and the feelings of mankind.
Beautiful girls and elegant men reflect his vision of life. In Palazzo Barberini we find the portrait of his best model, la Fornarina, the doughter of a baker. Half naked, with a delicate smile, this girl has been the last lover of Raffello. Maybe something more, because after a recent restoration, a wedding ring with a diamond appeared on her finger. The mistery of this ring is due to the best friend of Raffaello, Giulio Romano, who covered it in order to conceal a scandal: Raffaello was engaged with a noble girl, but he loved the Fornarina and he married her with a secret wedding.
In Galleria Borghese a wonderful representation of the excruciating grief of a mother, grieving the death of her son. The Pala Baglioni is a painting on wooden board of the Deposition of Christ. Jesus is hold by two men, stretching their muscles for the dead weight. Other characters are crying and Mother Mary faints. The realism and drama of the scene reminds us the sorrow of the noble lady who commissioned the painting: a Perugia war of clan left the young son of Lady Baglioni dead.
To change atmosphere, we have to visit the beautiful Villa Farnesina, along the river Tiber. The rich merchant Chigi wanted a place where to meet the important guests, and the Pope was among them.
Of course Chigi called Raffaello, who together with other artists, frescoed the colourful lodge, full of pagan gods and goddesses, exotic animals and the soft light of the Roman sunsets. This rich palace, with all the halls decorated represent the change of interest of Raffaello. Without leaving his first passion, painting, he started to project architecture for the same patrons.
In the church Santa Maria del Popolo, he designed the Cappella Chigi, a side chapel full of expensive decorations, the same chapel described by Dan Brown in the novel – and movie – Angels and Demons.
And just few months before dying, Raffaello decided to lengthen the main nave of St Peter’s Basilica. The original project of Michelangelo, of a church with the shape of a Greek Cross, with all the arms of the same length, was abandoned for a more elegant church with the shape of Latin Cross. The triumphal , 400 feet long nave to reach the main altar and the tomb of St Peter, is due to the intuition of this genius.
We have to say goodbye to Raffaello and pay a visit to his tomb. In the Pantheon, the huge circular dome in the centre of Rome, a modest sarcophagus still keeps the body of the artist and of his young betrothed, dead few months before him.