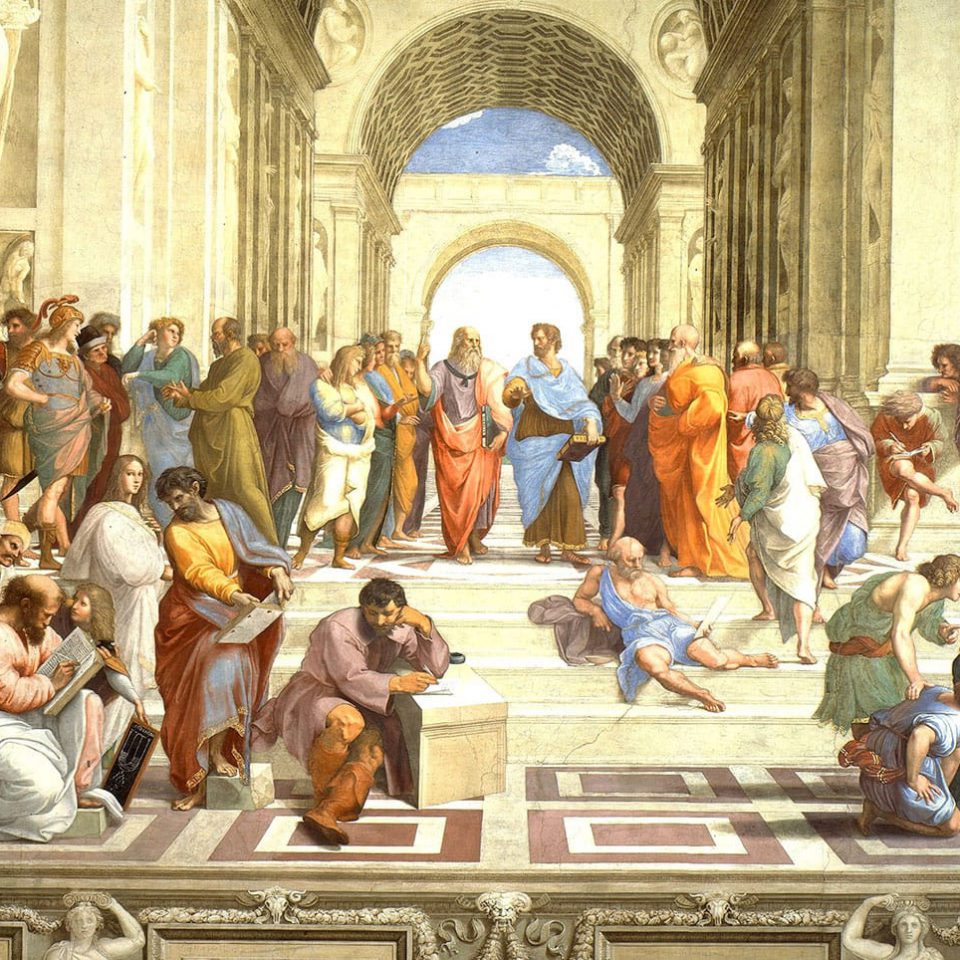 RAFFAELLO IN THE VATICAN

Raffaello Sanzio has been one of the greatest artist of the Italian Renaissance.
Together with the other two geniuses, Leonardo da Vinci and Michelangelo, the young painter reached terrific achievements during his short life.
He was born in Urbino, in the calm countryside of the Marche, but soon left his birthplace where his father worked as a noble servant to the local landlord.
The young boy went to Perugia, to learn to paint from the famous Perugino, one of the artist of the side walls of the Sistine Chapel. Then Raffaello went to Florence, the real heart of Italian art.
Even so young, he distinguished himself for the originality of the portraits, committed by the aristocrats and by the rich merchants. The portraits made by Raffaello kept a deep intensity and realism, revealing the character of the subject. Famous is his selfportrait, showing a young and serious man, dressed in black, with a hint of melancholy, maybe due to the loss of his parents, when still a child.
His last move was to Rome, the city of the Popes, were huge amounts of money were spend to enrich the holy places, the basilicas, and the pope’s private apartments.
All the great artists of the time painted, carved, designed brave and innovative architectures, Bramante rebuilding the St Peter’s Basilica, Michelangelo painting the ceiling of the Sistine Chapel, Perugino, Pinturicchio, Botticelli.
Among those giants, the 26 years old Raffaello was chosen by the Pope Julius II to decorate his private apartments. Surrounded by his friends artists, this kind and generous young man, reached the level of his rival Michelangelo, painting three of four rooms of the pope.
To enjoy those frescoes we enter the Vatican Museums, before reaching the Sistine Chapel.
His most famous work is the School of Athens, a large fresco describing in a geometrical 3-D environment a great number of Greek-robed philosophers.
In this wonderful fresco, Raffaello paid a tribute to all the artists he knew, showing his generosity. Central is the long bearded Plato- Leonardo da Vinci. In the close-up a distracted and moody sturdy man with a black beard, isolated from the others, it is the portrait of Michelangelo, the harshest enemy of the sweet Raffaello. Raffaello acknowledged the greatness of Michelangelo and so added his portrait as a tribute.
In an another room of Julius II, he describes four panels with four dramatic moments for the Christian faith. Those threats were all foiled by miracles. The most beautiful is the liberation of St Peter from the prison he was kept by the Romans.
In the last room started by Raffaello, we notice the change of style, from an elegant, renaissance realistic representation of human body, to a powerful, twisted, more Michelangelo-style description of men and women. Raffaello was already ill, before his untimely death at 37, had been influenced by the heroical , almost baroque style of Michelangelo.
Raffaello never finished the last room which was completed by his mourning helpers and friends.