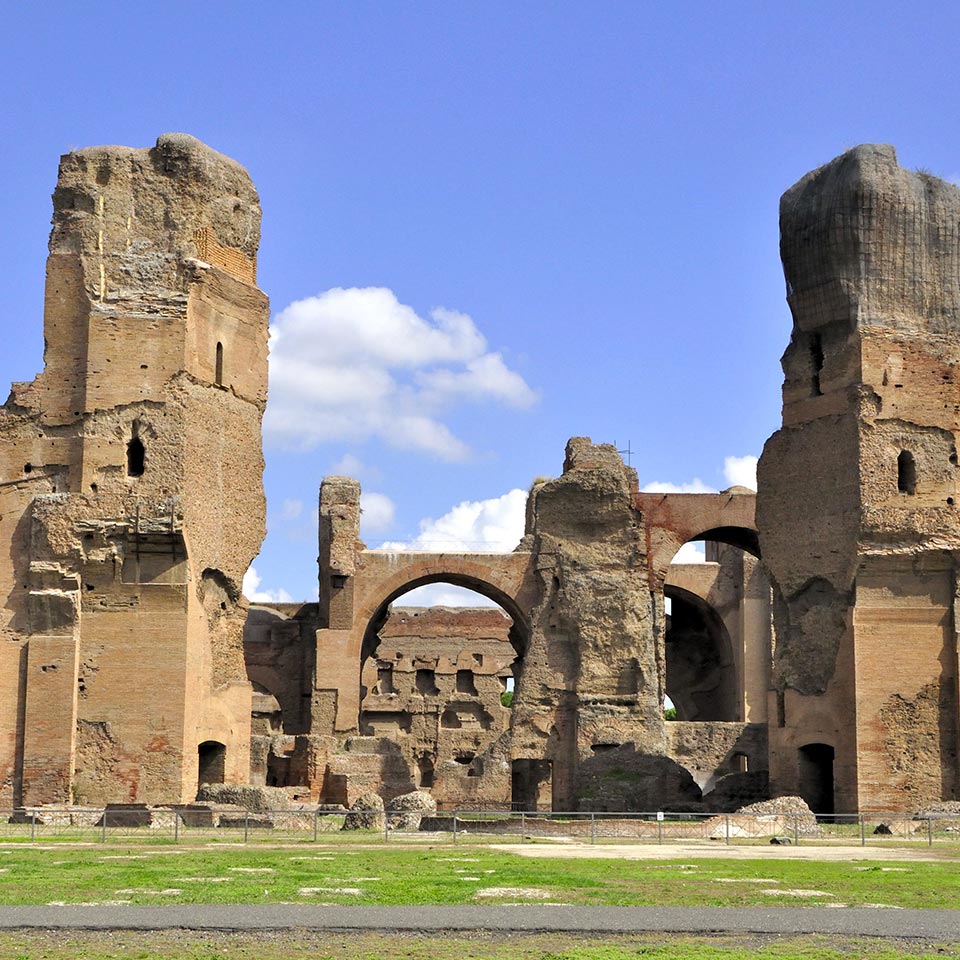 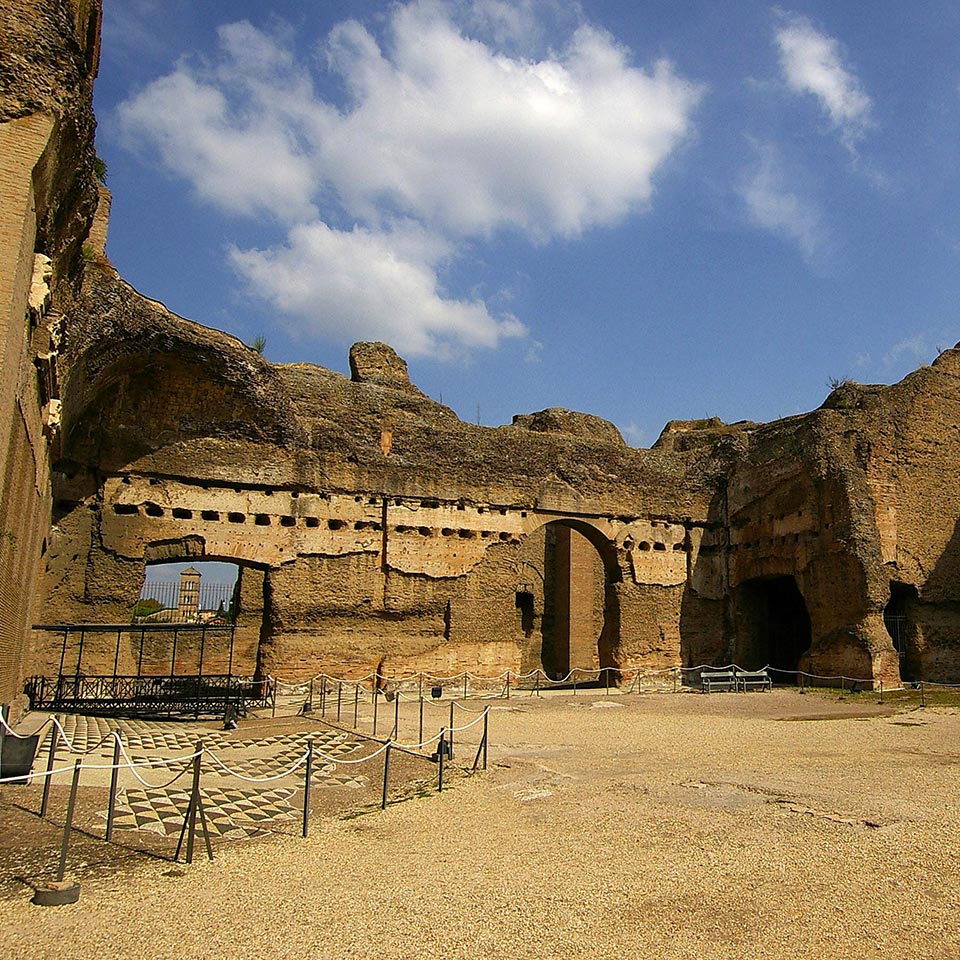 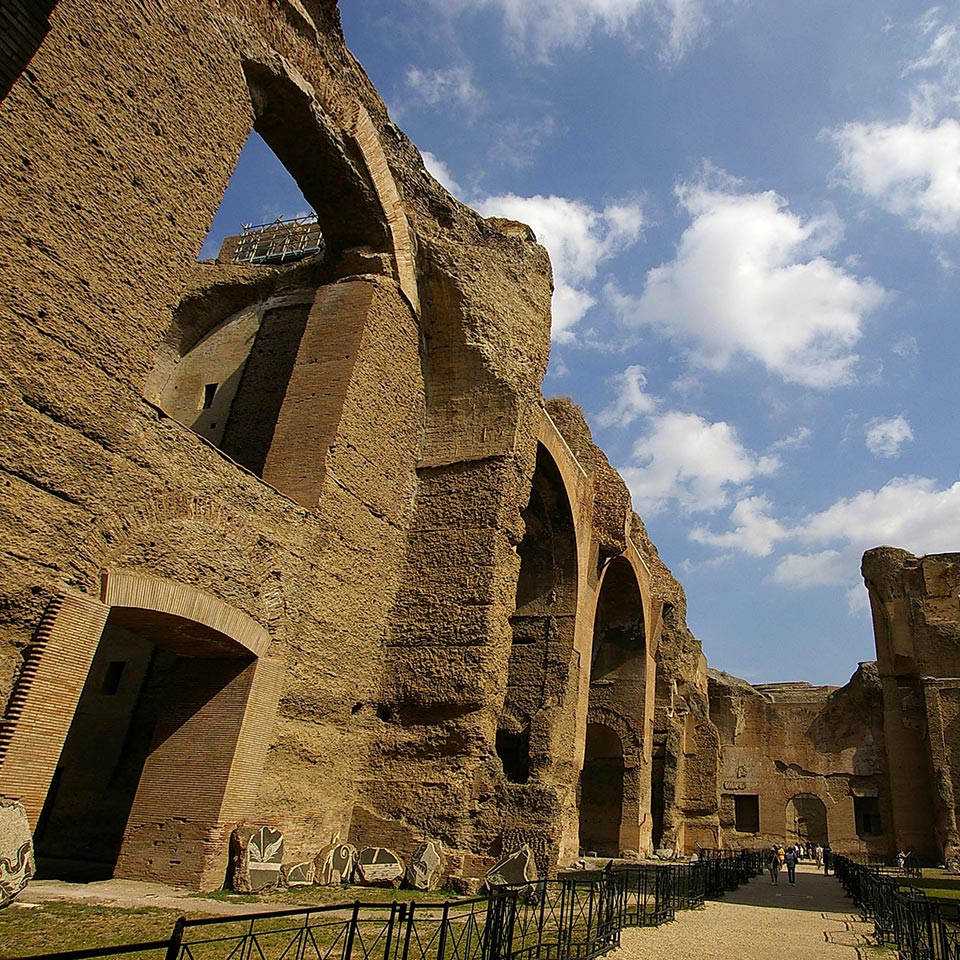 Water and fountains in the Ancient Rome – Full day tour

Water has always been important to the city of Rome. Since its foundation along the tiber river to the construction of the aqueducts. We will show you the places where the romans loved to spend time to celebrate the “Mens sana in corpore sano” “An healthy mind works only in an healthy body”. End the tour in a modern spa in the centre of Rome.

Enter the City of Power, flow along the ways of water. A river, a huge complex of aqueducts, underground canals. Rome was the centre of an intricate confluence of waterways, all for the needs of a population of 1,000,000 people, who wanted to drink fresh and clean water, and to bath every day in the enormous public Imperial Thermae.

Meet our English speaking driver that with the reserved car. He will take you to the Caracalla’s Baths where you’ll meet your licensed English speaking Guide to start your tour of the Thermae of Rome.

– The Caracalla’s Baths or The Thermae Antoninianae, one of the largest and best preserved ancient thermal complexes, were built in the southern part of the city under the initiative of Caracalla, who inaugurated the central building in 216 a.D.

After that, the driver and the guide will take you through the ancient Roman Forum area passing by the Circus Maximus, the Palatine Hill and the Coliseum.

The tour continues with the visit of the Baths of Diocletian. They were the grandest of the public baths, or thermae: they are in Piazza della Repubblica, a semi-circular square at the summit of the Viminal Hill. The former name of the piazza, Piazza dell’Esedra, comes from the large exedra of the baths of Diocletian, which gives the piazza its shape. The porticoes around the piazza were built in memory of the ancient buildings on the same sites.

– Diocletian’s Baths, inaugurated in 306 A.D. , were the largest and most sumptuous of the Imperial baths. The Baths served for the people residing in the Viminal, Quirinal, and Esquiline quarters of the city. The water supply was provided by the Aqua Marcia aqueduct, that had long served the city of Rome since the early 2nd century A.D., and that still conveys water to the famous Trevi Fountain.

– The Basilica of St. Mary of the Angels and the Martyrs is a titular basilica church in Rome, built inside the frigidarium of the Baths of Diocletian in the Piazza della Repubblica. The basilica is dedicated to the Christian martyrs, known and unknown. Michelangelo Buonarroti worked from 1563 to 1564 to adapt a section of the remaining structure of the baths to enclose a church.

After that, driving along the Via Nazionale, you will see Venice Square where there is monumental neoclassical Tomb of the Unknown Soldier “The Vittoriano” dedicated to the Unification of Italy. The tour continues to The Pantheon, one of the best-preserved of all Ancient Roman buildings. It has been in continuous use throughout its history, and since the 7th century A.D., the Pantheon has been used as a church dedicated to “St. Mary and the Martyrs”. Almost two thousand years after it was built, the Pantheon’s dome is still the world’s largest unreinforced concrete dome.

– After an intensive tour, we invite you to try our exclusive treatment in a real modern Thermae in an ancient surrounding. The Pantheon Happy Wellness Experience: (Turkish bath, light legs massage, relaxing back massage, or plantar reflexology) will be waiting for you for a 60 minutes relax.